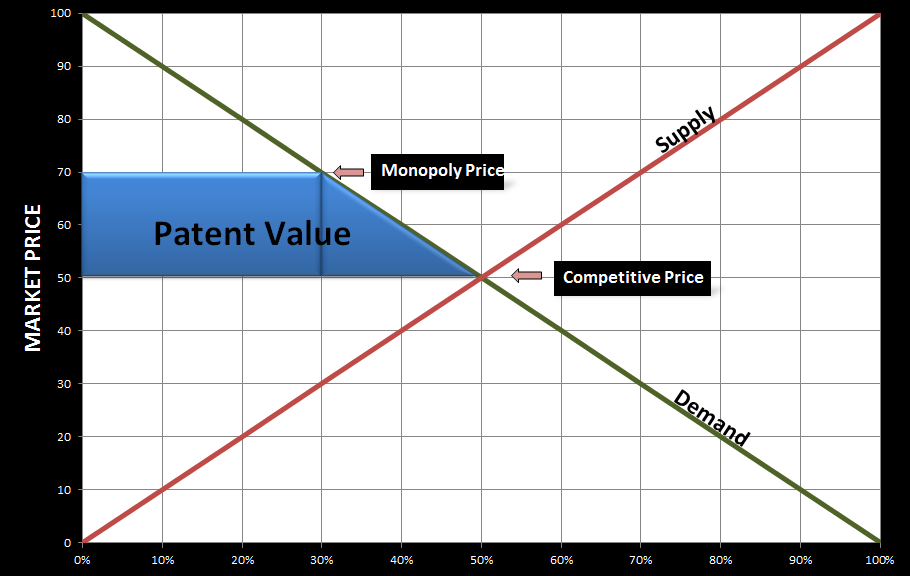 In our intellectual property valuation practice, we are often asked by patentees how they can get a proverbial back-of-the-envelope assessment of the value of their patents. What at first blush sounds like a reasonable request, its proper answer is not as easy as most would like to think.

In this series of blog posts, I will strive to address the question from a practical perspective. In the end, I believe we shall see that not only is there no simple answer, but the question might not be the right one to begin with.

At the risk of repeating what must have been replied myriad times by patent attorneys and IP professionals, a patent is only the temporary right to exclude others from a specific market delimited by a written description of an innovation [USPTO Patents Portal]. It does not represent the right to practice an invention, or title to a royalty income stream; several factors are co-determinants of the economic value of the opportunity the patent represents.

For example, if an inventor is issued a patent on an innovation which he/she cannot implement directly and no one else needs such invention to operate their business and satisfy actual consumer demands, then no actual market segment exists for the invention. That patent is not simply worthless, rather it represents a net cost to the patent holder as obtaining a patent in the first place requires one to cover drafting, drawings, filing fees, and other prosecution costs which, realistically, are no less than $1,500 and could be as high as ten times that amount [Current USPTO fees].

By contrast, consider a situation where there is market demand for, e.g., an accessory that props up touchscreen cell phones because: (a) a large number of such cell phones are in use; (b) the phones must be held at an angle for confortable viewing of videos; (c) the cost of manufacturing the accessory is low relative to the phone at the appropriate volume levels. In this case, the value of this limited accessory business would be proportional to the net profits of the venture.

Then, a patent that claims that invention would likely have economic value because the patent holder can exclude others from making, importing, using, and offering for sale, or selling that invention throughout the US and sell the product at a monopoly price. This price would be greater than the competitive price and, thus, the patent holder would effectively be reaping an economic rent: the incremental profit at the monopoly price over the net profit at the competitive price. Only this portion of incremental profit would be attributable to the patent and would therefore be the value of the patent.

Thus, it is because the phone accessory business has value that a patent on the device would have economic value and, furthermore, the value of the patent is different from the value of the underlying business (and always smaller if the business is profitable in a competitive environment).

Consequently, at this initial level of the inquiry, the right question would be closer to: What is the value of the underlying business, and how much can a patent contribute to that business value?

We shall cover additional principles in the IPmetrics® Blog, and dig deeper into useful tools for estimating the elusive patent values.

Yesterday, the Court of Appeals for the Federal Circuit (“CAFC”) issued a precedential ruling to the effect that, among other issues in the Uniloc v. Microsoft case, as a matter of Federal Circuit law the 25 percent rule of thumb is a fundamentally flawed tool for determining a baseline royalty rate in a hypothetical negotiation. Evidence relying on the 25 percent rule of thumb is thus inadmissible under Daubert and the Federal Rules of Evidence, because it fails to tie a reasonable royalty base to the facts of the case at issue.

The appeals court was very explicit in stating that Uniloc’s damages expert Joseph Gemini’s starting point of a 25 percent royalty had no relation to the facts of the case, and as such, was arbitrary, unreliable, and irrelevant. The use of such a rule fails to pass muster under Daubert and taints the jury’s damages calculation.

Consequently, as the jury’s damages award was fundamentally tainted by the use of a legally inadequate methodology, the CAFC affirmed the grant of a new trial on damages.

A rule is found

In the late 1950s, Robert Goldscheider performed an empirical study of 18 commercial licenses involving the Swiss subsidiary of a large American company (see e.g.- R. Goldschider, “Litigation Backgrounder for Licensing,”Les Nouvelles, 29 (March 1994), p 20-25). Those licenses referred to the transfer of intellectual property rights to a portfolio of patents, the flow of know-how, trademarks, and copyrights to marketing materials (Goldscheider, Jaroz, and Mulhern, “Use of the 25% Rule in Valuing Intellectual Property”, Chapter 22 in G. Smith & R. Parr, Intellectual Property, Wiley & Sons, 2005). The licensees paid royalties of 5% of sales and typically generated operating profits of 20% of sales. Thus the 5/20 or 25% rule was “discovered.”

Uniloc’s patent (US5,490,216) covers a system for software registration which Microsoft is allegedly infringing by the way software activation works in Microsoft’s Product Activation feature that acts as a gatekeeper to Microsoft’s Word XP, Word 2003, and Windows XP software programs.

Uniloc’s damages expert arbitrarily picked out an unexplained value attribution of $10, at a minimum, for a Product Key in the context of Microsoft’s business. While it is clear that software piracy prevention measures are valuable, this initial approach completely ignored any specific analysis of the contribution of the software registration algorithm. Dr. Gemini then applied the 25% rule to this $10 amount and posited that $2.50 per activation was the proper royalty due to the patent holder. Multiplying this amount times the number of the accused Microsoft Office and Windows activations, 225,978,721 in all, generates the purported “reasonable royalty” of $564,946,803. The jury found Microsoft willfully infringed the ‘216 patent and awarded $388,000,000 in damages. (The expert then performed a “reality check” of this number by misapplying the Total Market Rule. This is an additional topic we shall touch on in a later post).

Why it is wrong

Over the years, the 25% Rule has been used without much attention being paid to its significance and applicability. From the outset, the “rule” reflected a post-fact measure of the contribution of a complete bundle of intellectual property rights which included all four major categories of IP (trade secrets, patents, copyrights, and trademarks) in a specific industry and economic environment. Based on our collective experience in valuation, licensing, and damages calculations, the specific facts and context of a transaction, license, or case are the arbiters of the value of intellectual property. To adequately reflect the fair market value of a patent, as in this situation, attention must center of what specific contributions are made from an economic perspective, e.g. does it reduce the cost of production, enable new applications, attract market demand? In fact, the determination of a reasonable royalty as the base measure of patent infringement damages has a well-established process that lists the multitude of factors to be considered (the Georgia-Pacific Factors). It is also well established that the 25% Rule of Thumb is not an appropriate guide line for the determination of a reasonable royalty rate under a Georgia-Pacific analysis. A proper patent infringement damages expert analysis must carefully tie the damages amount to the invention’s market significance and this cannot be accomplished with a rule of thumb.

A new trial on the question of damages has been ordered by the CAFC and we shall expect a reconsideration of the economic analysis behind the reasonable royalty attributable to the ‘216 patent. But, more than that, this opinion raises the bar for all future intellectual property damages analyses that must determine a reasonable royalty; no longer can superficial applications of pre-determined percentages be passed-off as “expert testimony.”

(Simultaneously published on the IPmetrics Blog)

The patentability and, therefore, the value of business methods and software are in the balance as oral arguments in the Bilski v. Kappos case are heard at the Supreme Court.

The future of software and business method patents still hangs in the balance, after oral arguments were heard by a Supreme Court with significant unknown factors as far as Intellectual Property law is concerned.

Few IP cases have had the breadth of potential consequences for industries like finance and software as the Bilski case. The economic value of myriad companies can be significantly affected if the Supreme Court refines the interpretation of what is patentable.

In essence, the Bilski patent claims to cover a method of hedging risks in commodities trading. The PTO’s Board of Patent Appeals (BPAI) found that Bilski’s such claimed “invention” of a business method does not satisfy the patentable subject matter requirements of patent law (35 U.S.C. § 101).

In Re Bilski (Fed. Cir. 2008)(en banc) the Federal Circuit affirmed this coclusion and, in doing so, the nine-member majority opinion spelled out what is known as the “machine-or-transformation” test as the sole test of subject matter eligibility for a claimed process. The “test” at issue here is: “A claimed process is surely patent-eligible under § 101 if: (1) it is tied to a particular machine or apparatus, or (2) it transforms a particular article into a different state or thing.”
Mr. Bilski appealed to the Supreme Court earlier this year, and a total of 68 amicus briefs were filed, a third of them in support of neither party, thus reflecting the importance of the ruling per se, more than the fate of the specific patent.
Positions on the matter are quite definite, for example, The Electronic Frontier Foundation considers business method patents are harmful and asks in its brief that such patents should not be allowed to stand. Rather, to be patentable, an invention must be a technological advance. Justice Sotomayor seemed to express this concern during the hearing when she asked a question regarding the difficulty in where to draw the line if there is no tie to science/technology, remarking that, otherwise, why not patent the method of speed dating?

The Software and Information Industry Association, on the other hand, argues that the patent eligibility of software is well established and should not be disturbed. The consequences for the software industry are clearly dramatic, but it borders on stretching the original concept of the “useful arts,” those activities suitable for patentability, beyond the comfort zone for both Justices Scalia and Ginsburg, for example. The latter, in particular, explicitly asked Mr. Jakes, representing Bilski’s side, why the U.S. should not limit patentability to science and technology, as in Europe.
In a well known position, the American Bar Association’s position is to support the elimination of patents covering tax planning methods in particular, and generally, that Patent law should not interfere with the exercise of human intellect by granting a monopoly on processes in which thinking is central.

Numerous corporations from banking to the internet also seek to have the Supreme Court rule against the patentability of accounting methods, tax mitigation techniques, financial instruments (like Bilski’s), among other methods.

We await with great interest, on behalf of our clients, the Supreme Court’s decision on this important issue.